When I was asked to art direct the Weekend cover story about the trend for super-sized restaurants in the D.C. area, there were no visuals. Well, at least there weren’t any good ones. The story was about the recent opening of several very large restaurants (one of which seats 1,000 people) as well as a parallel trend of some really tiny ones (two of which only seat 12 people). Nothing had been photographed specifically for the story so the only pictures at my disposal were file photos taken at the various restaurants, the best of which had already run in the newspaper and the rest of which were of the food. My reaction? Woohoo!

Size (big and small) was obviously central to the story, and I wanted to show that visually. Not having photographs that I was required to use meant I was completely free to find the best ways to tell the story. I decided to show scale in three ways: comparison, quantity and typography.

My first idea was to show just how big the large restaurants were compared to the small ones. At first I thought about making a bar chart showing the number of seats at each restaurant, perhaps with each bar in the chart being a stack of plates. While this was an interesting way to show the number of seats, the order the restaurants would be displayed in from left to right would have no real value. In other words, the bar chart required a linear presentation of the information, and that didn’t make sense here. Still liking the plate idea, I decided to create an infographic using dinner plates at different sizes as a way to show the number of people each restaurant could seat. I found a stock image of a white dinner plate with a gold rim (to give the plates some visual pop) and set off to size each plate to scale. I couldn’t just put a dinner plate on the page representing the smallest restaurant then scale the other plates in relationship to that (i.e. 230%) because that sizes the plates based on their diameter and not their area, which isn’t visually accurate. Plus, that would be too easy. No, this was a job for my trusty calculator and a foggy recollection of high school geometry: area = π multiplied by the radius squared. I measured the diameter of my smallest plate on the screen (12 points for 12 seats, get it?) then set about figuring out what the diameter would be for all the other plates. And because I’m crazy, I calculated the diameters to the nearest half point. The end result was this infographic: 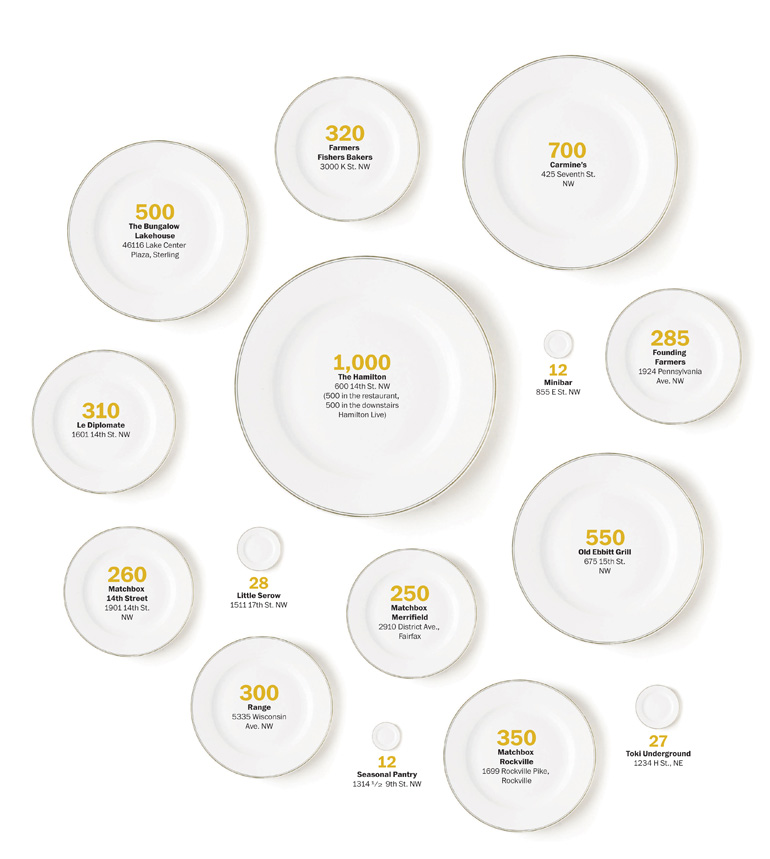 I initially wanted to put this concept on the cover, but I learned there was an ad sold there. So, I decided to use it inside as my main visual on the opening spread where it could run at the size it needed. However, that meant I still needed to come up with another cover idea — and fast.

The story was full of fun statistics that just begged to be called out. 1,000 meatballs? 9 kitchens? 20,000 oysters?! They were too good to pass up and were another great way to show readers just how big these restaurant operations were. I talked with reporter Maura Judkis to see if I could get more statistics, perhaps one signature ingredient from each of the restaurants featured in the story. Excited about the idea, she called up the restaurants again. Equipped with even more numbers, I created two more visuals for the package.

Inspired by the “Today’s specials” and “On the menu” boards you see at restaurants, I illustrated my own menu using my son’s sidewalk chalk, my own kitchen chalkboard and a stock image chalkboard frame. I originally proposed showcasing three different menu items (like those oysters), but the editors worried it would make readers think the story was about food. Instead, we featured three different restaurant statistics on the cover and used the other food numbers for a fun, visual sidebar inside. 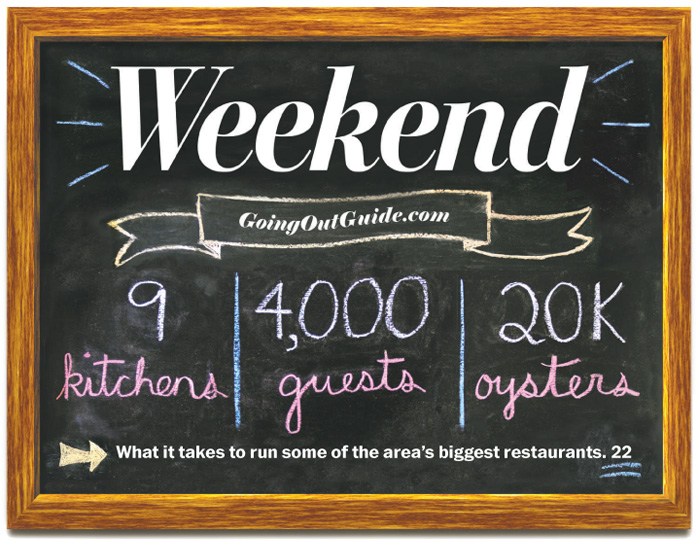 Those of you who know me or my work know that I love to play with typography. Of course, I could have just gone with a straightforward treatment, but where’s the fun in that? I brainstormed a bunch of different headlines and headline treatments where I could use one of the words really large: “Super-sized restaurants,” “Why size matters,” “Big (and small) restaurants,” etc. The editors liked “Big and small” best, and I liked how perfectly it worked with both the plate infographic and the main story. Once the words were in place, I added a drop shadow to the word “big” to match the dinner plate shadows as well as to emphasize its size. 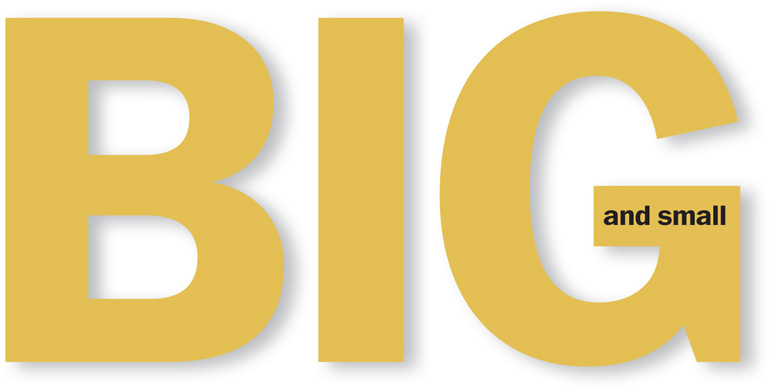 And here’s how all those elements came together in the April 26 issue of The Washington Post’s Weekend section. Special thanks to reporter Maura Judkis and editor Amy Joyce for their collaboration in the design process. And thanks to Greg Manifold for hiring me to work on such a fun project. 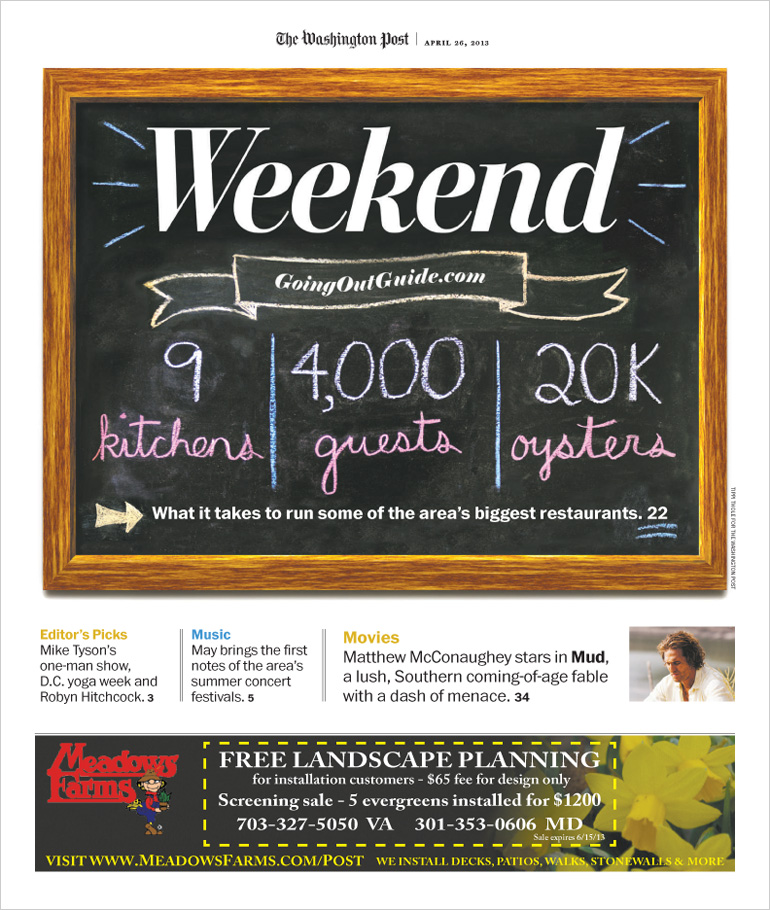 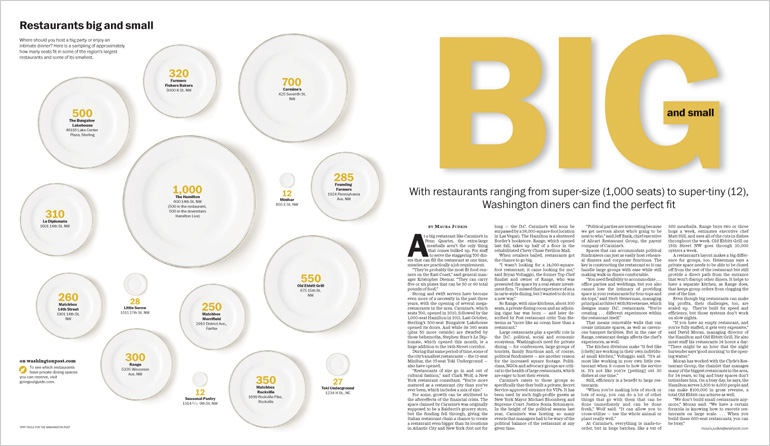 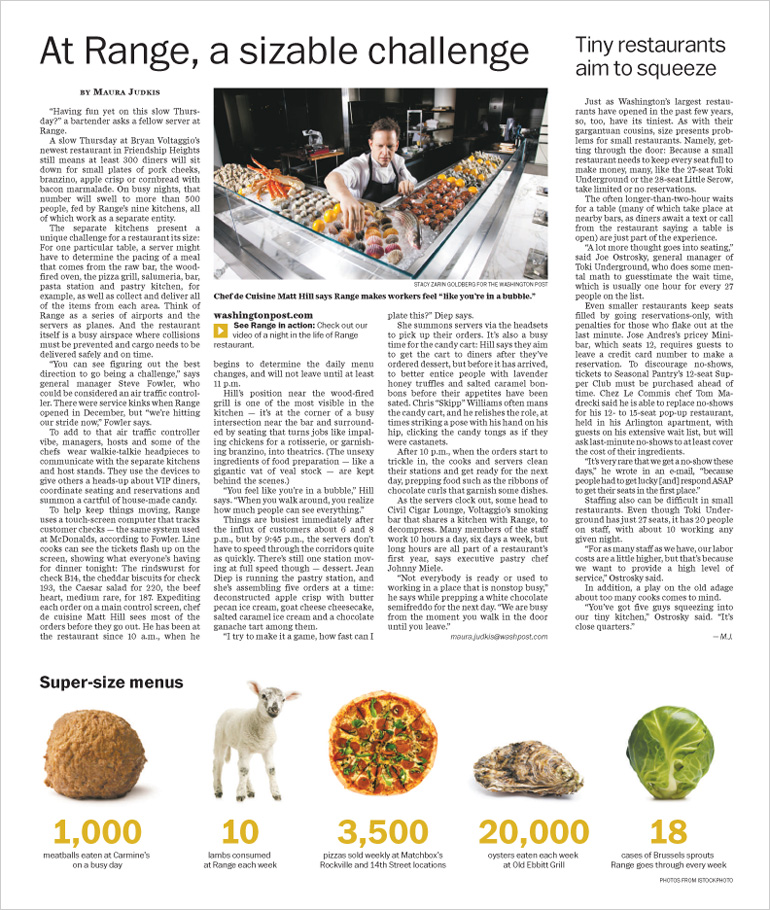